So – it turns out that China has it’s own little Persian/turkish region! It’s called the Xinjiang Uyghur Autonomous Region and it’s massive. It takes up 1/6th of China with a total area of 1.6 million square km! Western Australia is 2.5 million square km, so while it isn’t as big as WA, it is still huge. Especially for a country with 34 Provinces (and this region is one of them). With time running out in China we needed to choose two destinations to visit. Kashgar we had read about in our research and were eager to get there as we knew it was a real melting pot of peoples and we suspected it would be fairly “Arabic”. But a place we didn’t know anything about, Turpan, became our other choice.

Turpan. The second deepest exposed land surface in the world.

We didn’t know what to expect in Turpan, except that it would be hot. The town itself is located on the edge of the Turpan Basin which, after the Dead Sea, is the lowest exposed surface on Earth. Turpan town itself is at approximately 30m above sea level. Quite a change from where we had spent most of our time in China! Adjacent to town lies Flaming mountain, or rather a chain of mountains which are orange/red in colour which the locals say is because it is so hot… They should go and see the Pilbara! 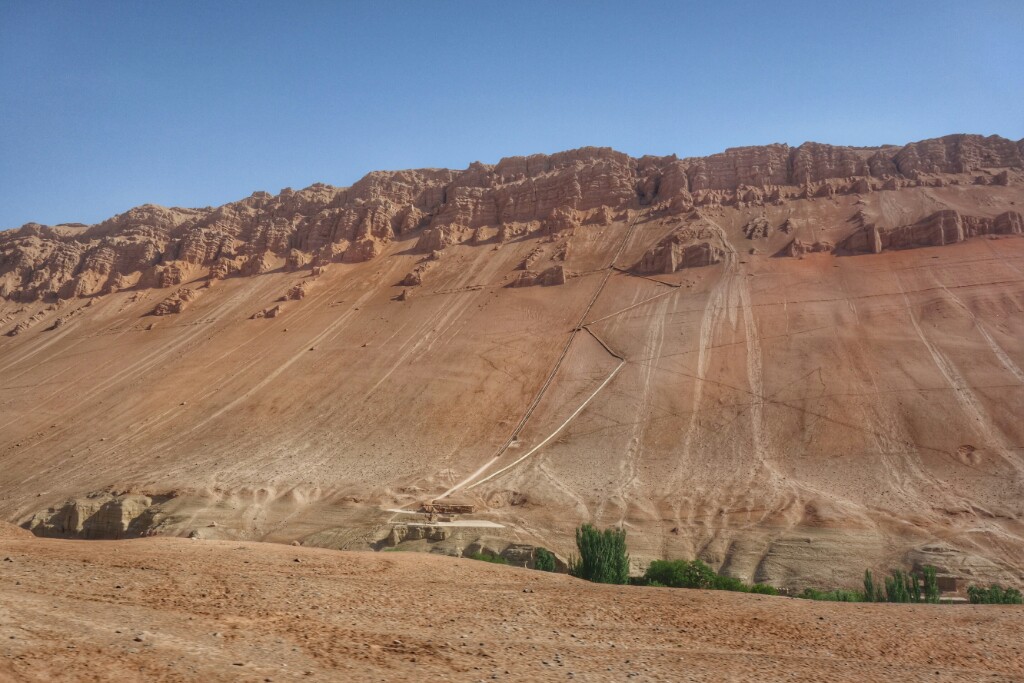 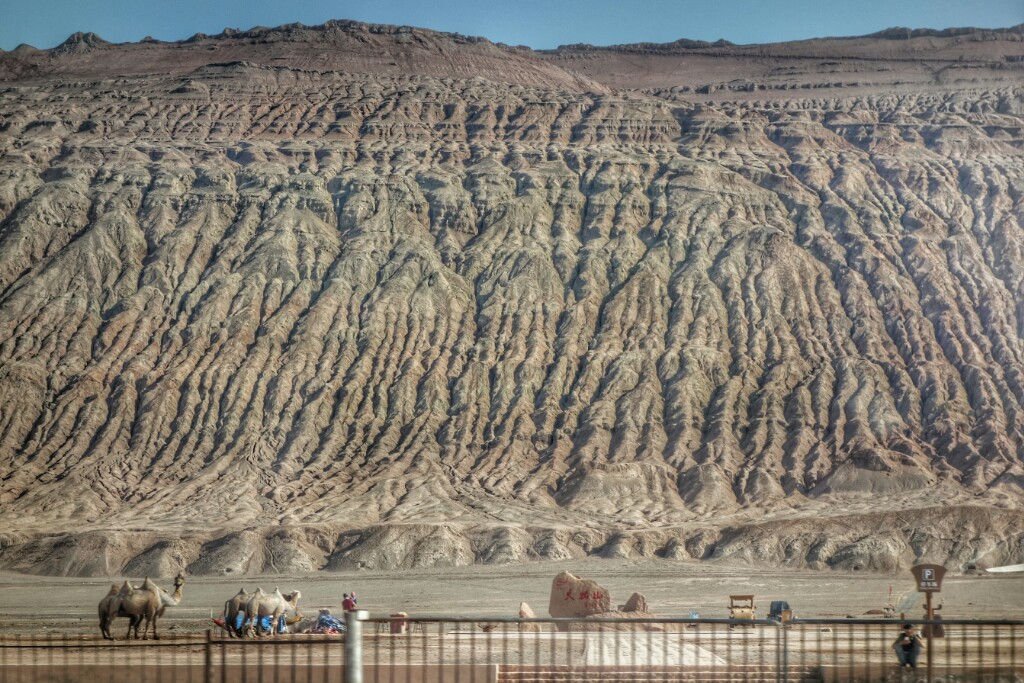 What blew our minds though is that it felt like, after a 5 hour bullet train ride, we had arrived in the Middle East! The climate, architecture, food, people and many other little things had changed significantly! Don’t worry though, China is Chineseifying it as quick as possible. New square lay-out road systems, cranes and square dancing is sweeping the joint. And the bullet train to here? I suspect that that was not provided to meet the creaking demand from the Uyghurs to be able to travel from their region. I don’t think many people at all really would have been demanding it. Our 8 car train had about, ahhh say 15 people in the first 7 cars and then about 40 in ours (Chinese tour group – yay). and there was like 7 trains that day! China wants to develop this region and in doing so, they are bringing the Han Chinese in and all of their customs and ways of life as well. The consequence of this? Tension and lots of it. The Xinjiang Region has seen a raft of “terrorist” attacks, bombings and these sorts of things in recent years. Without getting involved, I kind of get why they are angry, but hey – not my problem and I’m not going to write about it here. 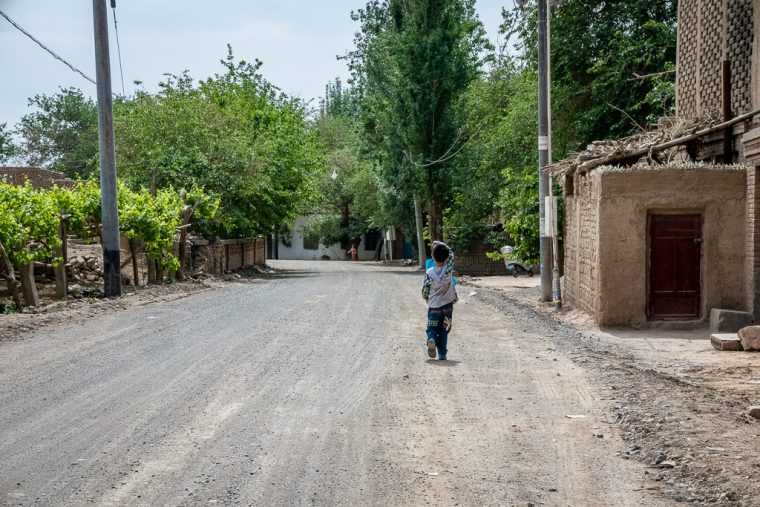 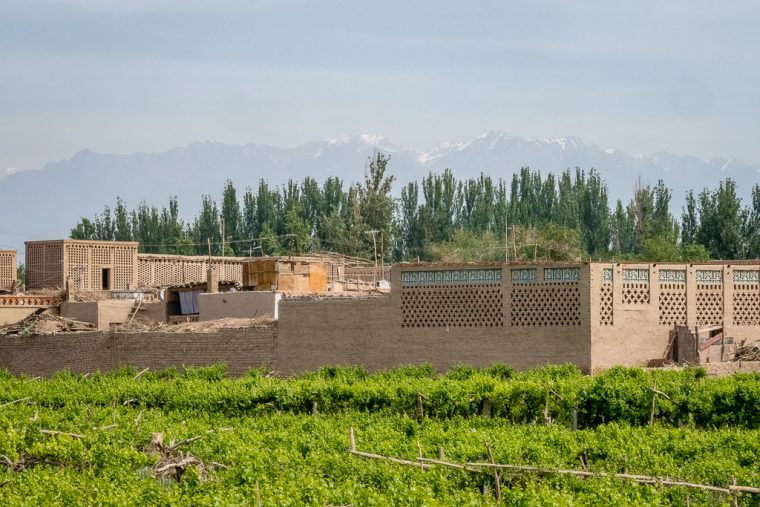 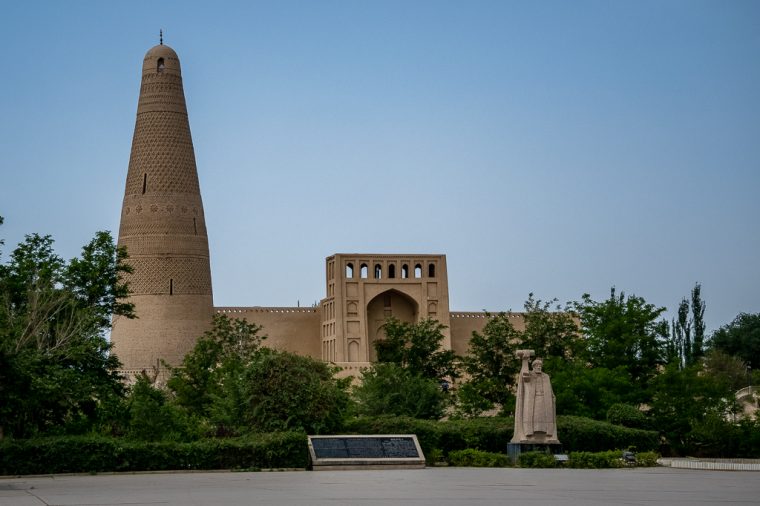 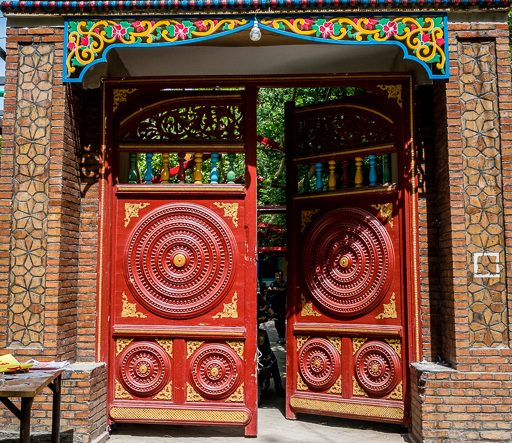 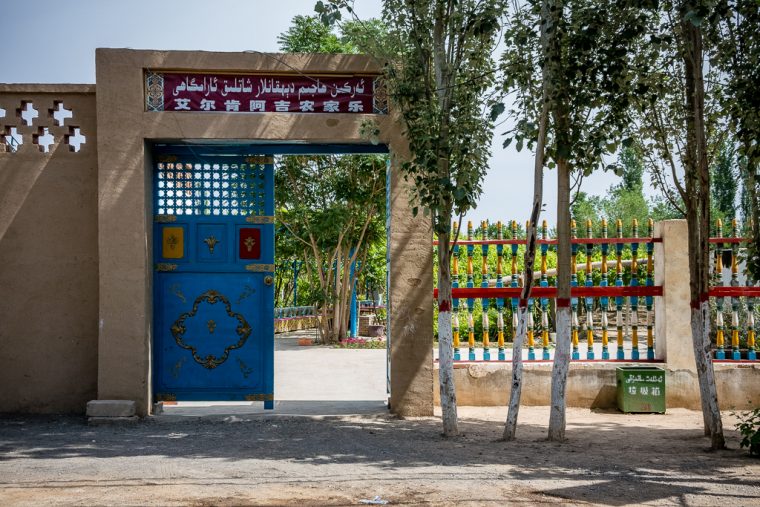 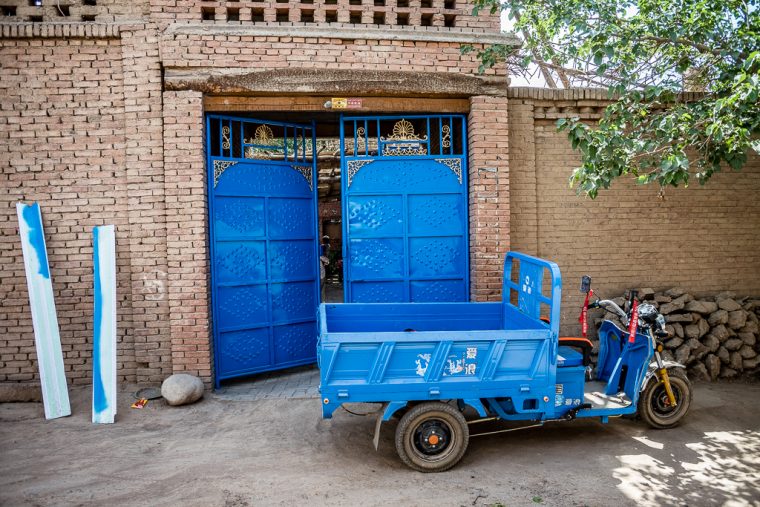 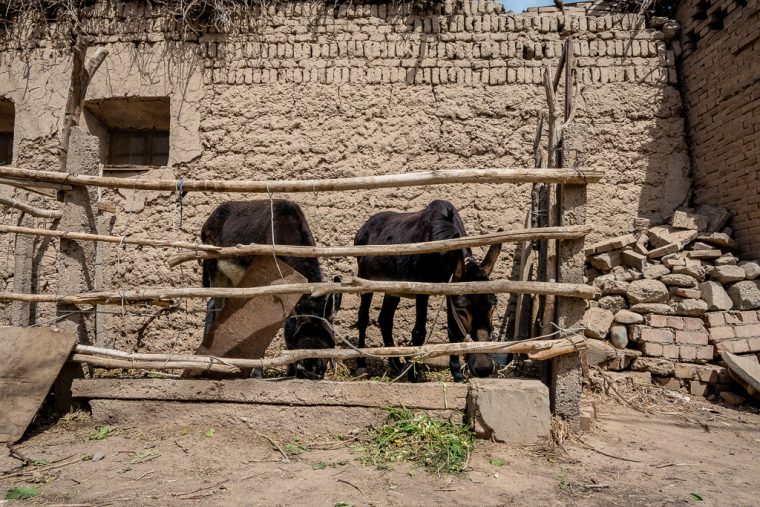 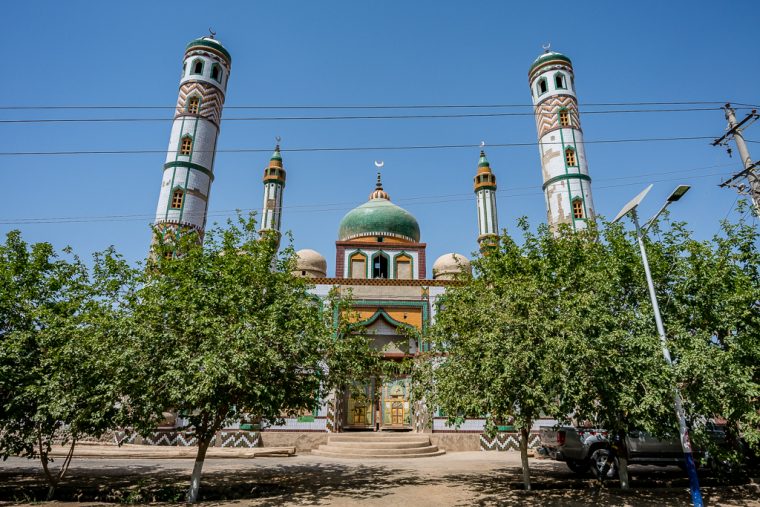 After our dinner of splayed(?) fish on our second night here, we met a local guy called Sheyih Muhammed who kindly offered to take us around Turpan the next day to show us the sights! All he wanted in return was to practise his English. Perfect! So the next day, we went on a whirlwind tour of the surrounds of Turpan.

We saw the Bezeklik Thousand Buddha Caves, dating back to the 5th to 14th centuries, where 77 caves, cut into the cliffs contain artefacts and murals of Buddha and other Buddhist images, surrounded often by Turks, Indians and Europeans. This is so interesting as it showed what sorts of people were coming through this region way back then! Unfortunately the caves have suffered from vandalism over the years from many sources including local Muslims (the area converted to Islam in around the 15th century), and European explorers stealing pieces for museums around Europe. “Some of the best preserved murals were removed by German explorer Albert von Le Coq and sent to Germany. Large pieces such as those showing Praņidhi scene were permanently fixed to walls in Museum of Ethnology in Berlin. During the Second World War they could not be removed for safekeeping, and were thus destroyed when the museum was caught in the bombing of Berlin by the Allies.” (Wikipedia). Devastating loss of history right there. 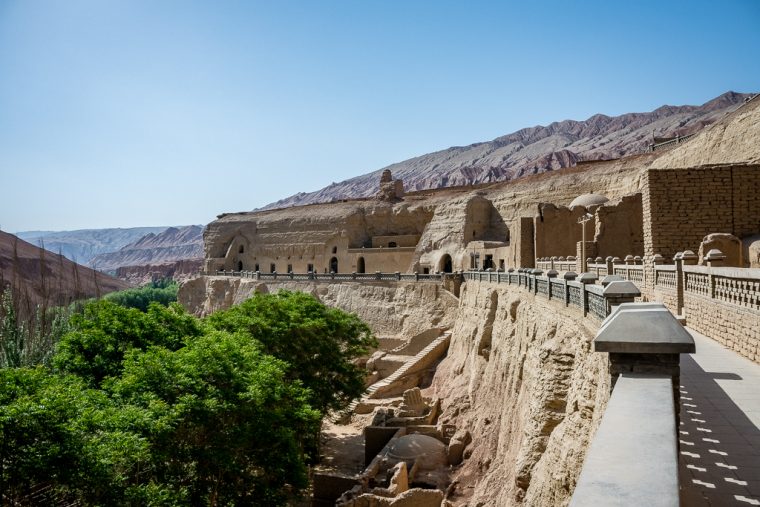 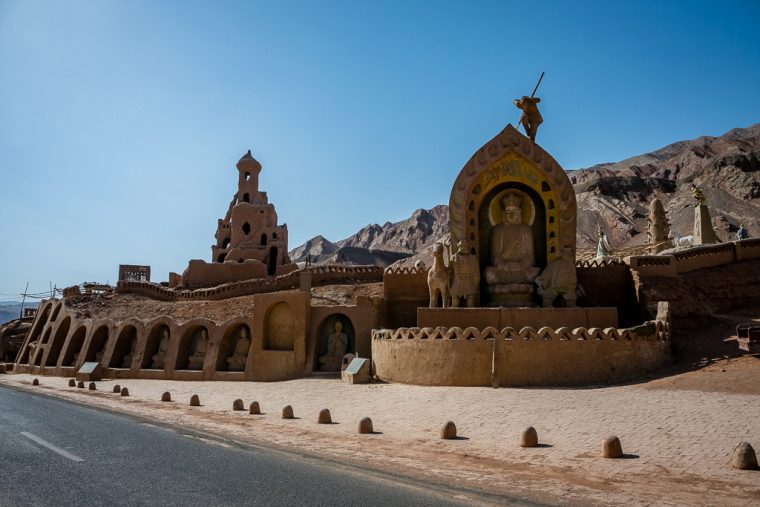 From here we were dropped off in a tiny village while the Muhammed and his cousin went to who knows where for 3 hours. He said he was going to his Aunties house for 1.5 hours but they got lost and apparently drove 100km to somewhere. I don’t know it was all a bit suss to me. But in the meantime Sheree and I had lunch (which definitely food poisoned us, more on that later), and walked to the Goachang Ruins, which just happened to be outside of the village (This whole region is great for this sort of shit. The dry desert preserves history extremely well so there are lots of things like this!). This place was MASSIVE (as in it spanned a massive area)! We had no idea it would be so big. It was friggin hot by now though so we snuck in through a hole in the fence, took some photos, took a moment to appreciate it and headed back to wait for Muhammed. While waiting, an Arabic David Podmore took us to his Mobile phone store so we could chill out of the heat and listen to Arabic dance music. Cheers Muhammed Podmore! 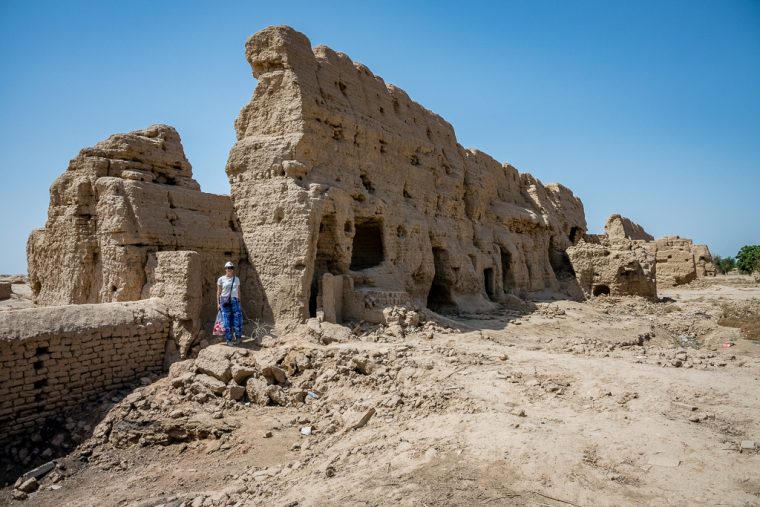 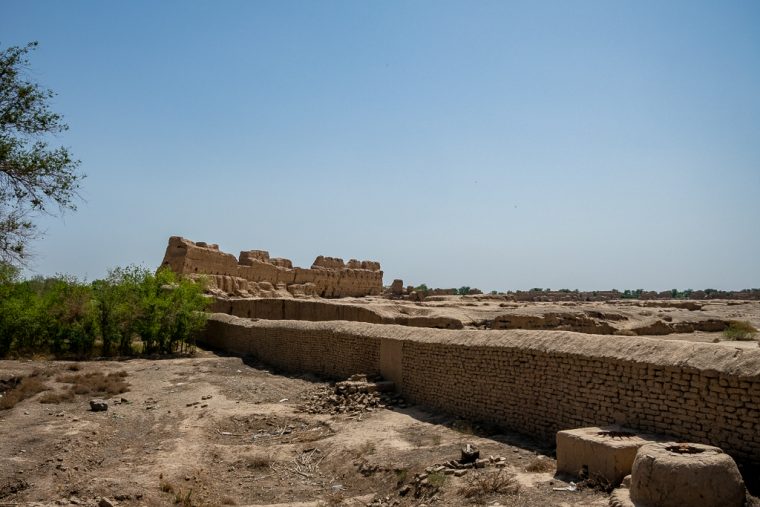 I’ll try to cut this down as this recount seems to be getting a bit long in the tooth. But the Muhammed finally arrives to pick us up and take us to the train station, via our hostel so we can get our train. In China you want to be at the train station about 60 minutes before it leaves because you just don’t know how long things are gonna take and to print out your ticket! Well. Muhammed rocks up flustered and tells us we can go to his Aunties house now! What??? So off we go, turns out she is like 5 minutes down the road, and we sat there, got fed and watered and met several members of the extended family. It turned out that we were there on a 1 year anniversary of the death of a beloved family member. Muslim tradition is to not just have one funeral, but to have a funeral, then a 3 month get together and a one year get together. I think this is great, to have everyone come together and remember the person who has passed away and show support to the close family, and it’s another thing I have seen on this trip where I think we could learn something. After about half an hour though, Sheree and I are thinking “OK we really should get going now”. Overall though it was such an amazing experience to be taken into a local Uygher home, especially at a fairly sombre and significant time. Their hospitality is incredible and they are really nice people. His cousin had blue eyes too which was pretty cool to see! Shows the genetic flow that has been going through this area for so long! Since beginning research on this trip a couple of years ago, I really wanted to see a kind of Arabic looking person with blue eyes in this region, so Tick! One more thing off the list. Long story short, after more dicking around than Rowan Clark getting ready for, well, anything, we finally arrived at the train station (50km out of Turpan) at 1800 with 20 minutes to go before our train departed. Muhammed turned into our hero though here as he basically ploughed through the Chinese people in the line holding our packs and my phone with our ticket number on it and got our tickets printed in like 2 minutes! What a legend. He really did show us a great day, and while we were nervous about missing our train at one point, we will always remember that day. 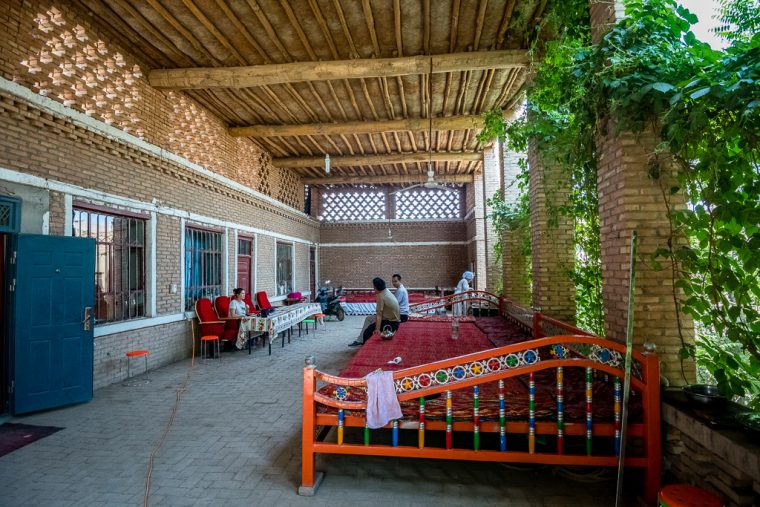 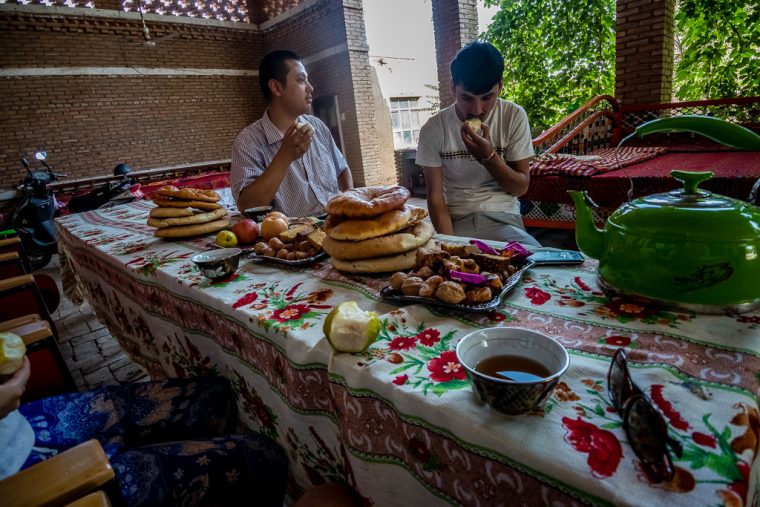 Kashgar. It’s probably an amazing place but all I saw was the toilet.

OK, so the title there is turning it up a bit, however, it’s not far from the truth! We took the bus from the train station to our hostel, where on the bus Sheree literally disappeared under about 50 muslims hahah, and we also went past the famous Sunday Bazaar (and this was Sunday too, so another Tick off the list!). Seriously, I’ve never seen a bus so full that when, at one stop, about 15 people got off and no one got on yet it looked exactly as full as beforehand. It was mental, but Sheree did pop up for air at one stage so I knew she was still there. I was not feeling good at this stage in my stomach and, when we got to our hostel, I beelined straight to the toilet. I won’t go into details but I believe our lunch the day before had made me sick, however I held everything in while on the 18 hour train, as there was no way i was using their toilet for a number 2. The result was….. undesirable. To make matters worse, this toilet didn’t flush so i had to find a hose thing and slowly get everything down with that. Not a great start in a place I had been excited about for quite some time!

Cue 3 days of hell (this paragraph is not for the faint hearted, faint stomached nor actually anyone probably because it’s mainly about my gastro)

The initial day for us both wasn’t so bad. We could still eat, but the following day, I was severely sick. The contents of my stomach and intestines completely emptied out form both ends at the same time and I could not hold any fluids down for most of that second day. This meant I couldn’t replace my fluids and I became really dehydrated, to the point of almost fainting. I was pretty worried! Especially when I googled a hospital and i find “Uygher Traditional Hospital”!! Great, their treatment would probably be “Rub lamb urine into some dill and crushed garlic and sip three times a day”. But luckily for me that was my lowest point and the next two days were just a really slow recovery. Also luckily was that on my worst day, Sheree felt fine, as far as going and having a beer with some other backpackers! (She wasn’t too worried about me clearly haha), and then I also had an OK day when Sheree had a little relapse, so we could look after each other when we needed to. But even sitting here 6 days on, we both aren’t feeling 100% yet. Whatever got us was a bloody doozy!

So what is Kashgar like? The Old Town is pretty awesome. It is like being in the Middle East. It is vibrant, noisy, there are peoples from many lineages (seeing a white skinned brown haired blue eyed kid is pretty astonishing!) and it’s just a hive of activity from about 7am local Xinjiang time to 11pm. But, after getting so sick we were both sooooo ready to leave. Not just Kashgar, but China too. 4 weeks and we were DONE. 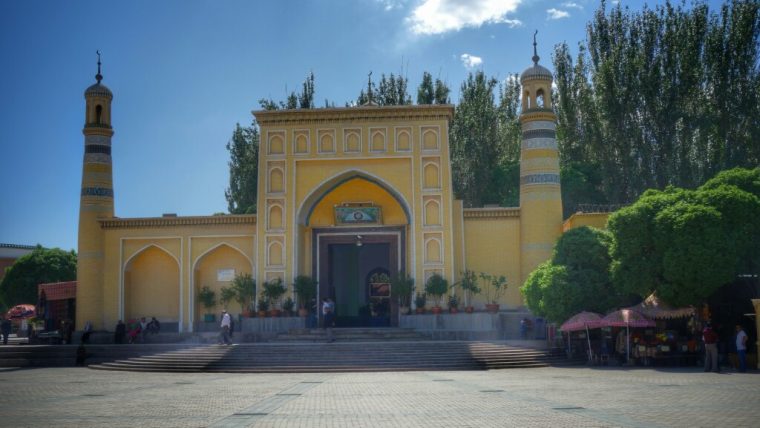 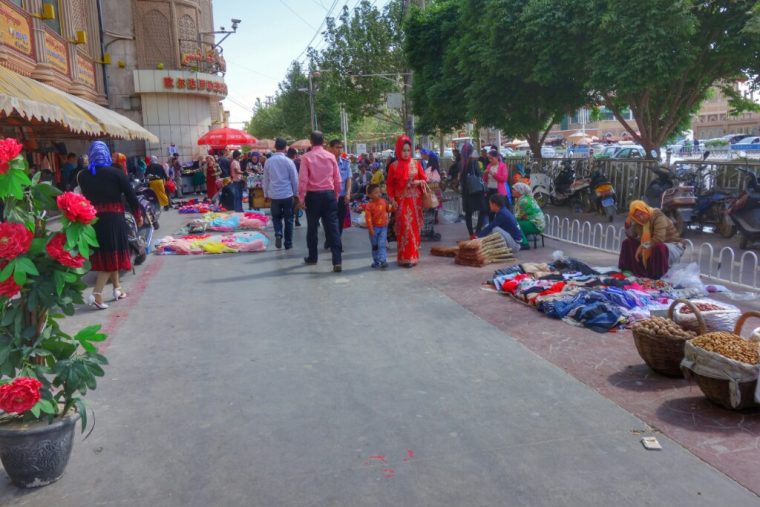 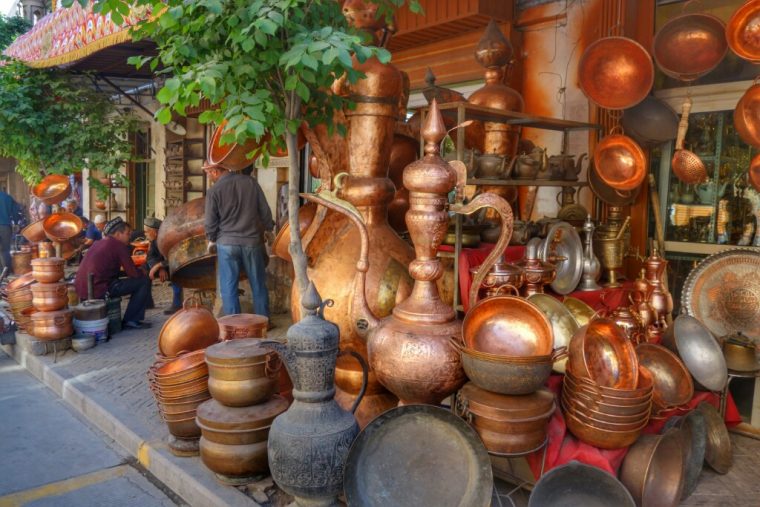 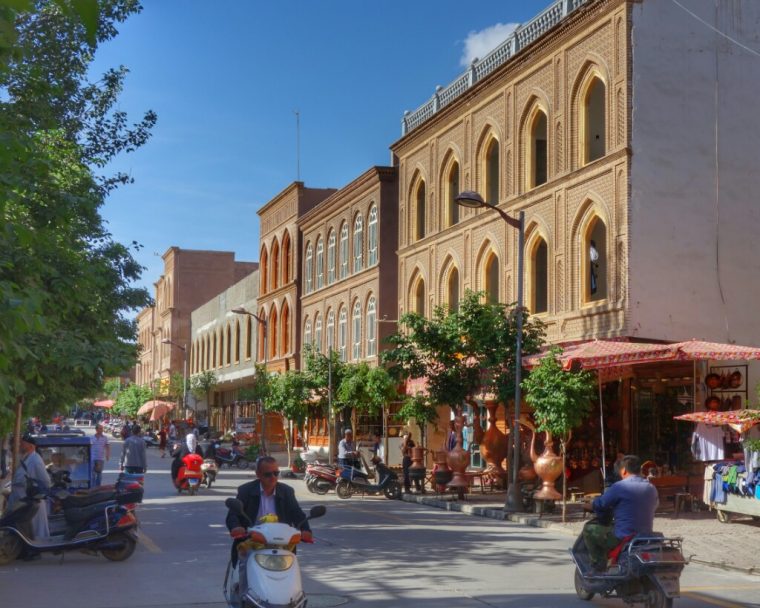 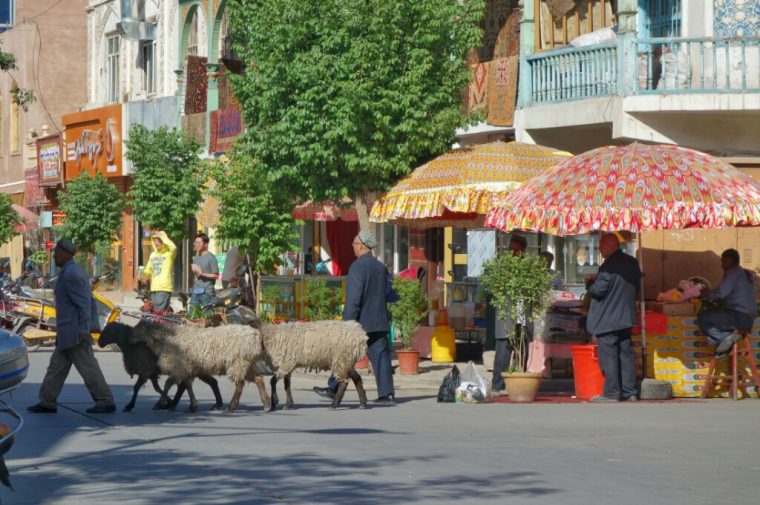 We had no idea what Kyrgysztan would be like (who does??) and had no idea what to expect on the crossing into Kyrgysztan – but one things for sure – we were excited to do it and find out! We suspected southern Kyrgysztan may be very similar to Kashgar as it is only about 200km away. But what we found took us both by surprise and we were totally stoked to be here. More on that in the next post!

Thanks for reading and sorry for making you feel sick if reading about Acute Gastroenteritis isn’t your thing :P.