Chengdu – A much needed rest – Then onto Ancient Xi’an

From the beautiful south of China we boarded a sleeper train and headed north to the mega, yet surprisingly “chilled out” 12 million people city of Chengdu. We were lucky to share our train compartment with a man from Urumqi who spoke zero English, but was determined to communicate with us anyway (Matt loved this guy, he was a 50 year old Chinese trucky who was missing one of his front teeth and did not hold back and clearly spoke his mind to everyone), as well as a young bloke (English name; Tracy McGrady – NBA player) with a translator app who spoke a little English. These two kept us entertained (especially Matt – with the help of translator apps) with questions and jokes. At one point Matt was surrounded by half the train carriage, all talking loudly and laughing… through the next 3 hours of loud chitter chatter we picked up about 10% of what was being said – but it was enough to enjoy some level of communication!

Chengdu was a nice city, but a bit grey, which suited our mood as we were both feeling pretty down and unmotivated. A combination of exhaustion and constantly being faced with the ‘strange’ and confronting world of China had gotten to us. Matt will expand on this further down. We decided to bunker down for a few nights to rest up, and didn’t do much except visit the cute, charismatic pandas at the research centre and eat some nice food (we were lucky enough to be taken out for the famous Sichuan Hot Pot with Tracy McGrady from the train and his brother he was visiting). This 6 days of rest was really worthwhile as after this we had a lot more energy, yet our spark for travel had not fully returned. It was nice though for the exhaustion to have passed. Sometimes on such long trips you just have to stop for a while, as brains can be saturated, even if it is mostly by seeing cool things! 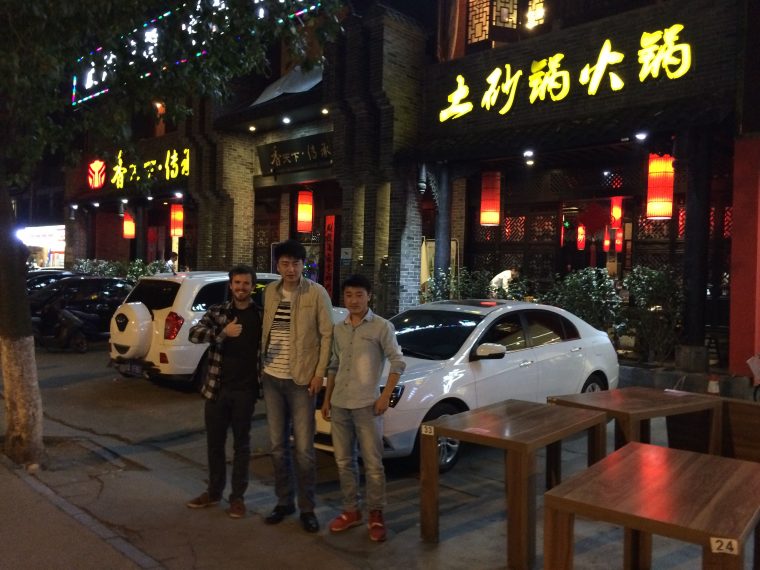 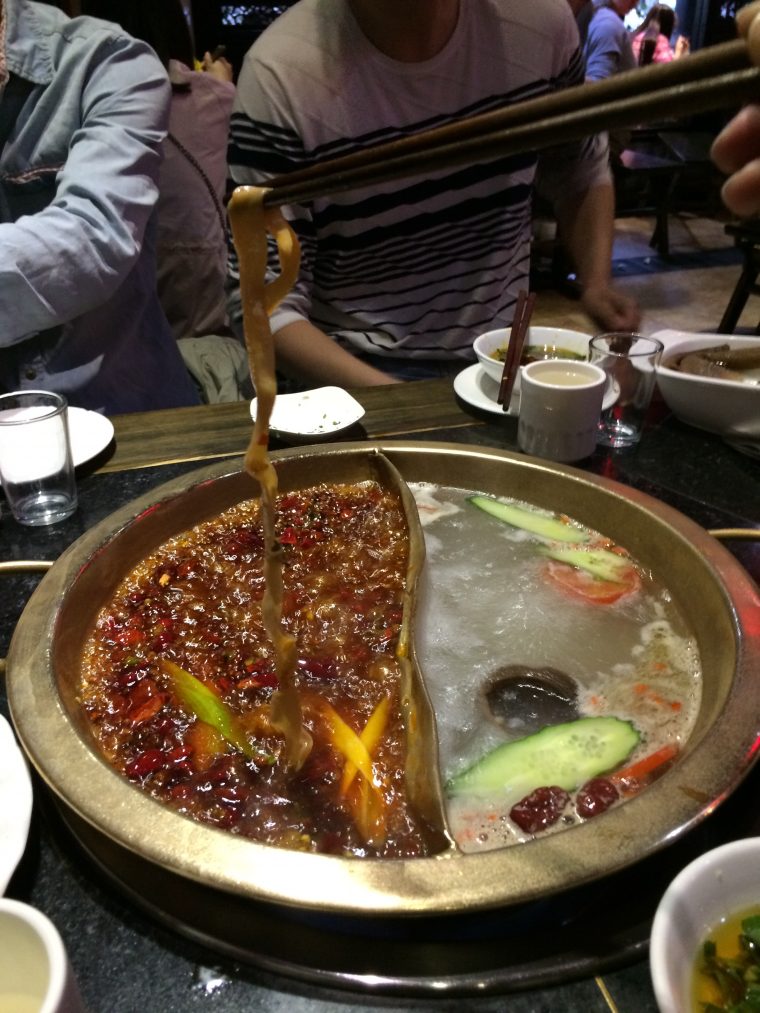 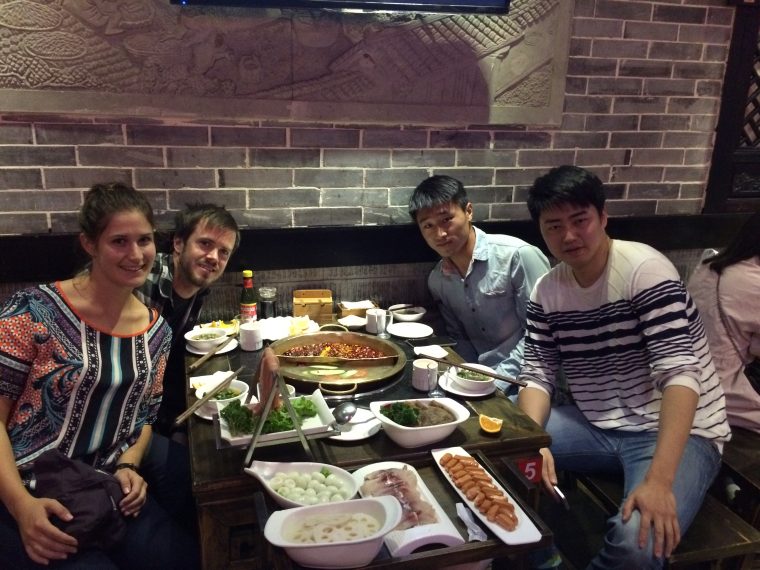 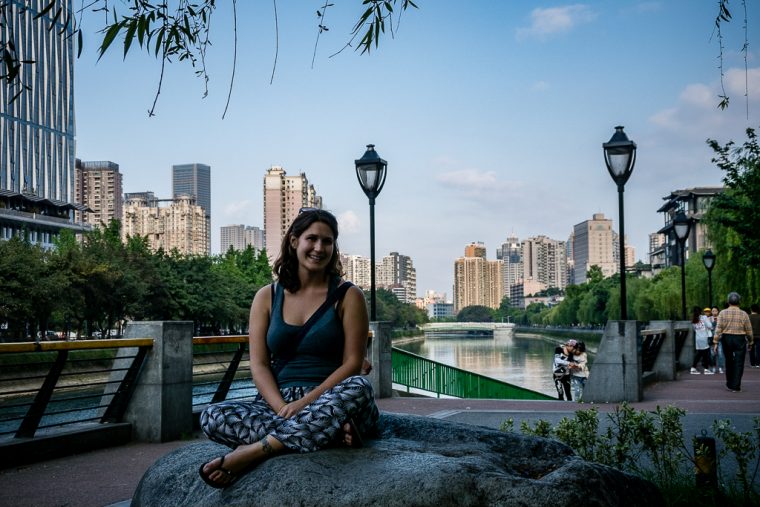 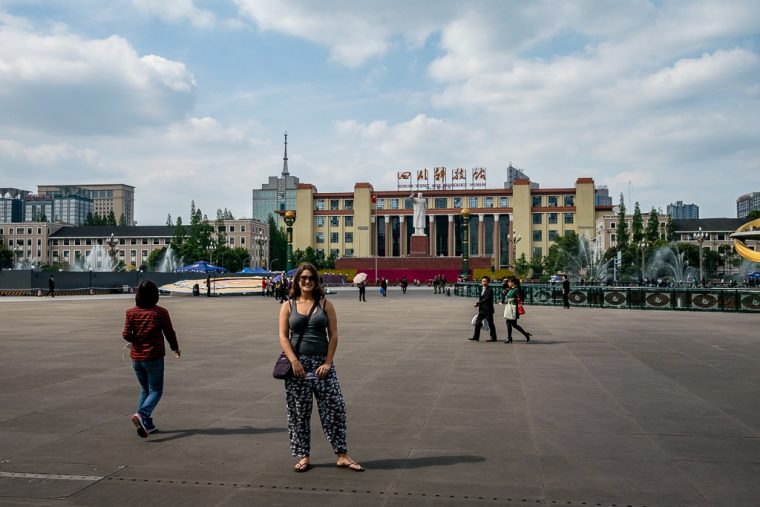 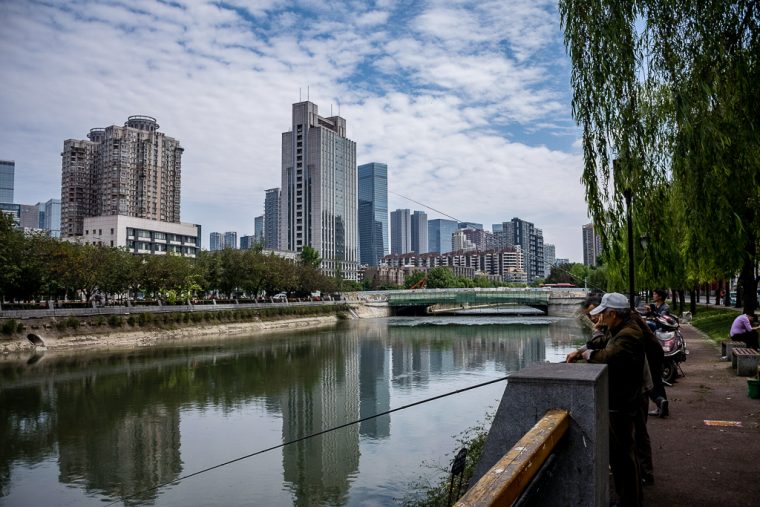 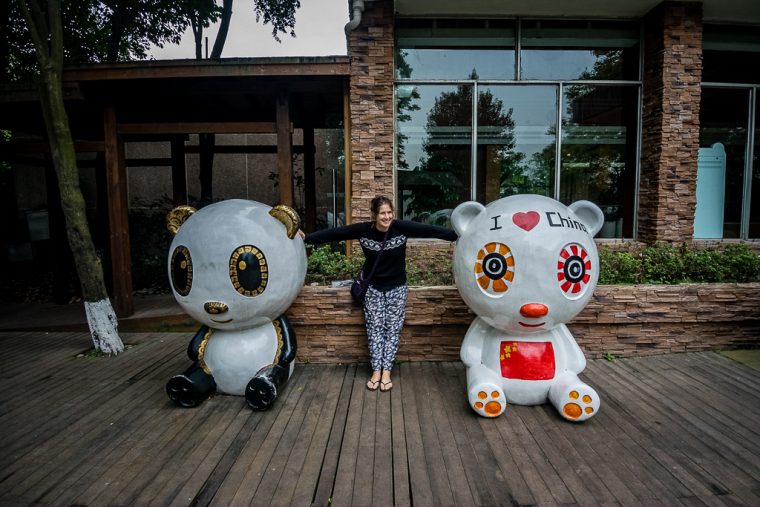 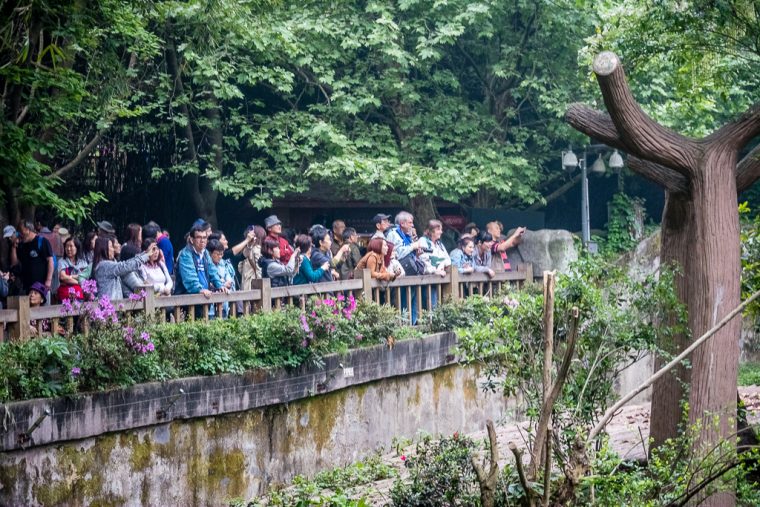 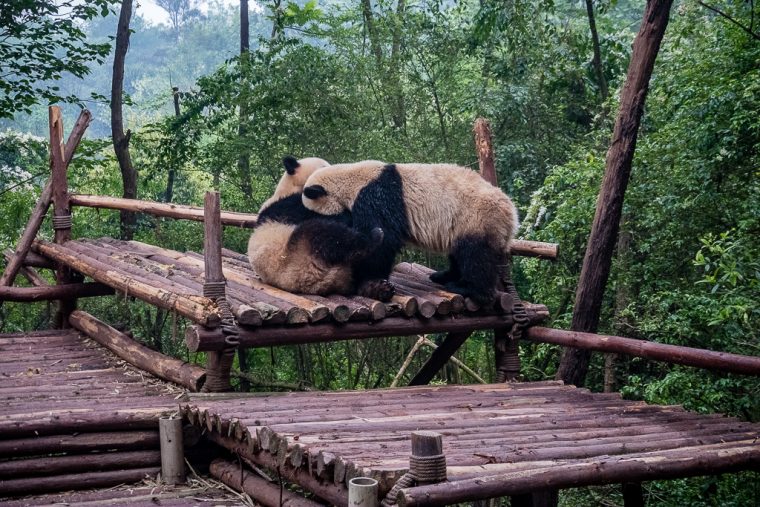 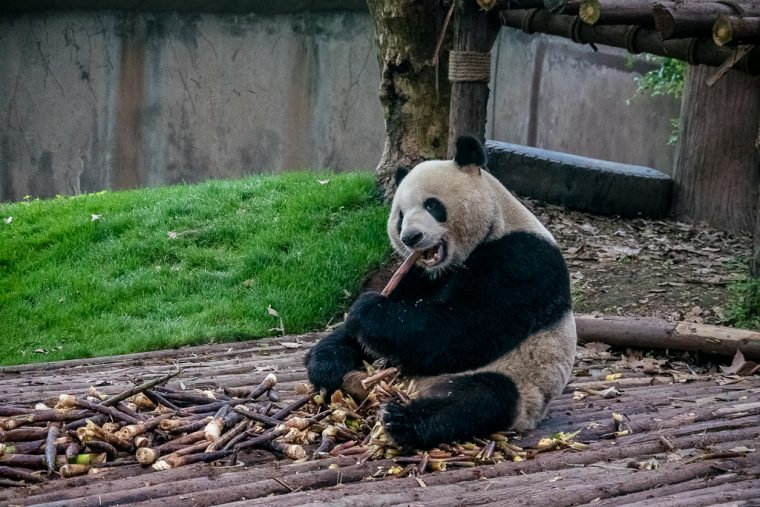 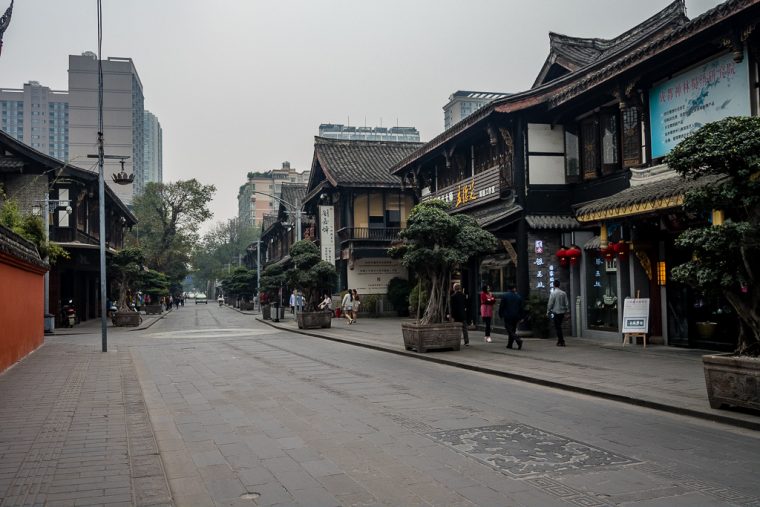 With renewed energy we took another long 20 hour overnight train ride to the ancient capital of China and the start of the fabled Silk Road, Xi’an (which has been the Capital of China an incredible 12 times over history!).

Here are some facts I copied for you off the internet if you are interested, otherwise feel free to skip…
(http://www.cultural-china.com/chinaWH/html/en/20Scenery102.html);

It was really interesting to see a middle eastern influence in the food and people, particularly in a famous part of the old city called the Muslim Quarter. We were pretty excited to see so much lamb on the menus (we had been missing red meat since home!), as well as spices, dried fruit, strange looking desserts and flat breads. With all these influences you could really feel that this city had a special place in history, especially as the eastern starting point of the Silk Road (which we were about to follow west). The other cool thing about Xi’an is the ancient wall that runs 14km in a rectangle around the centre of the city. The wall is not only intact and pretty damn big, but you can walk or ride a bike around on top of it, giving great views of the city. 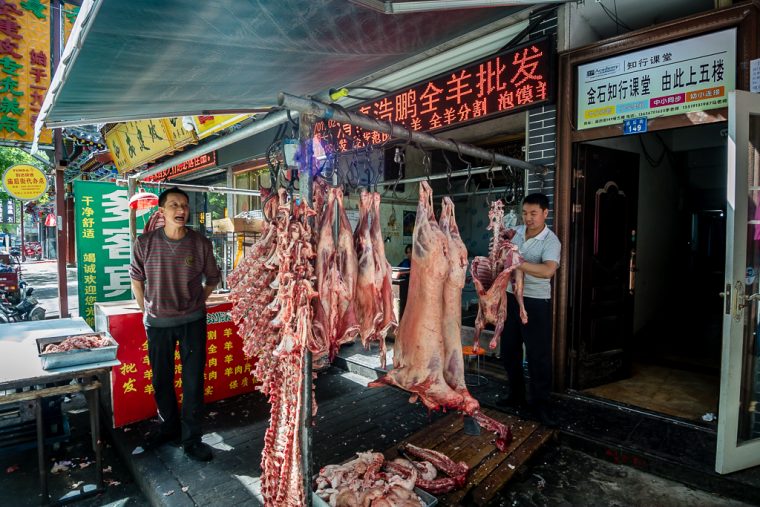 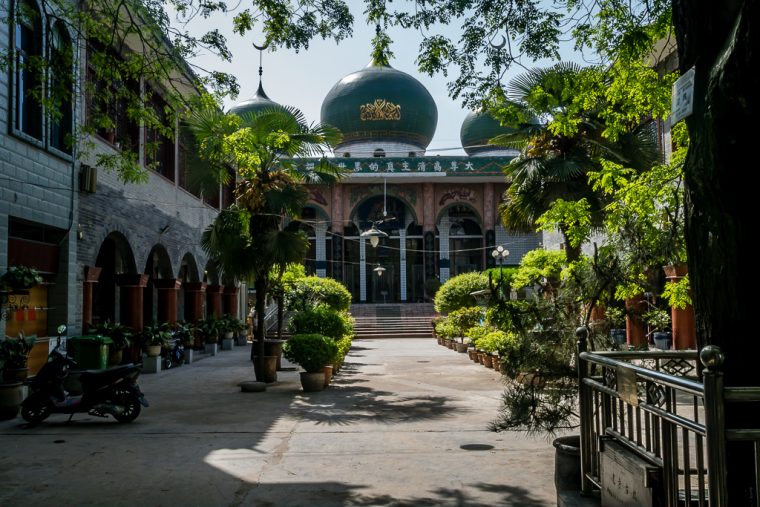 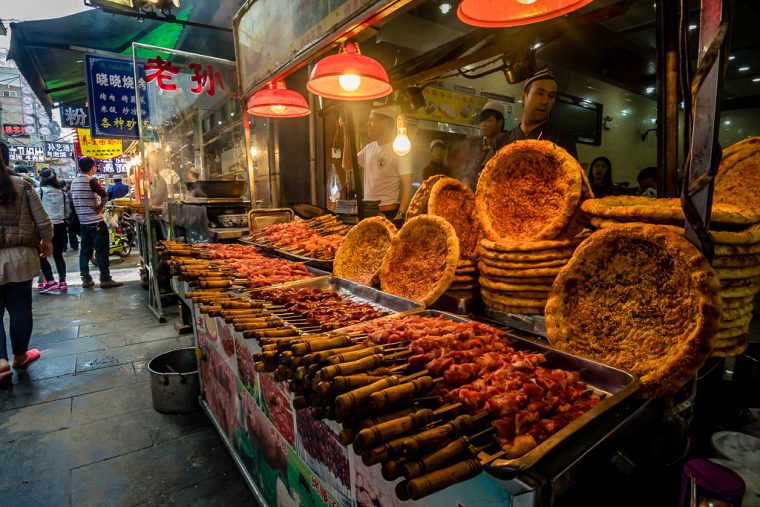 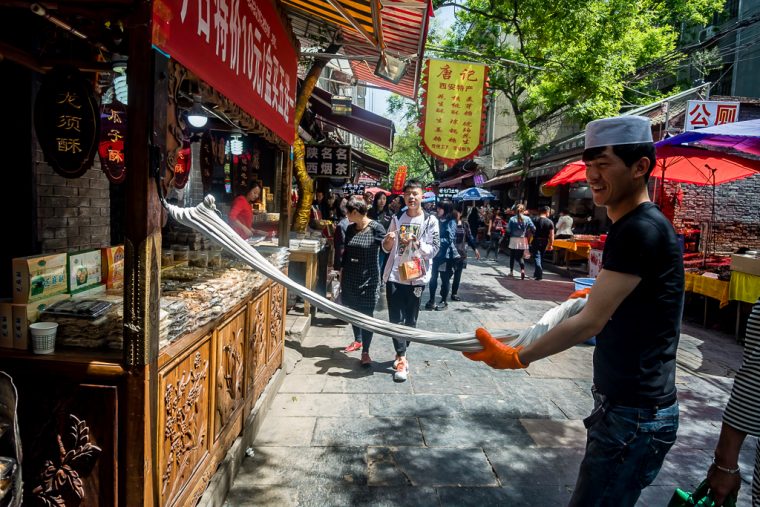 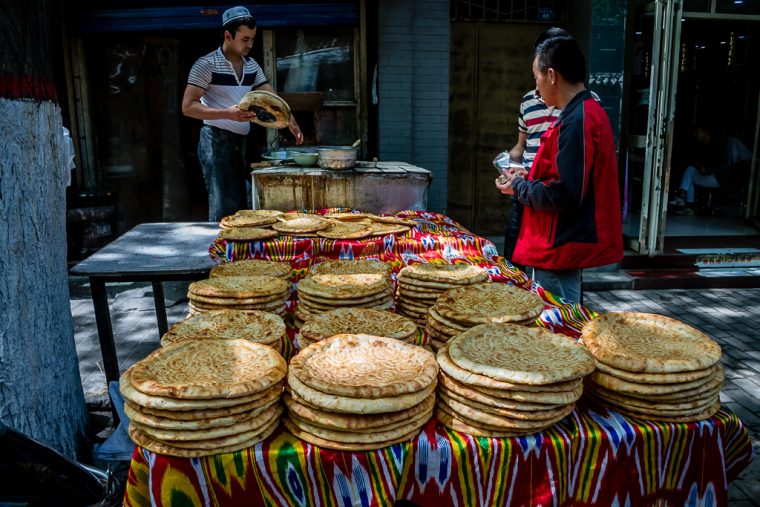 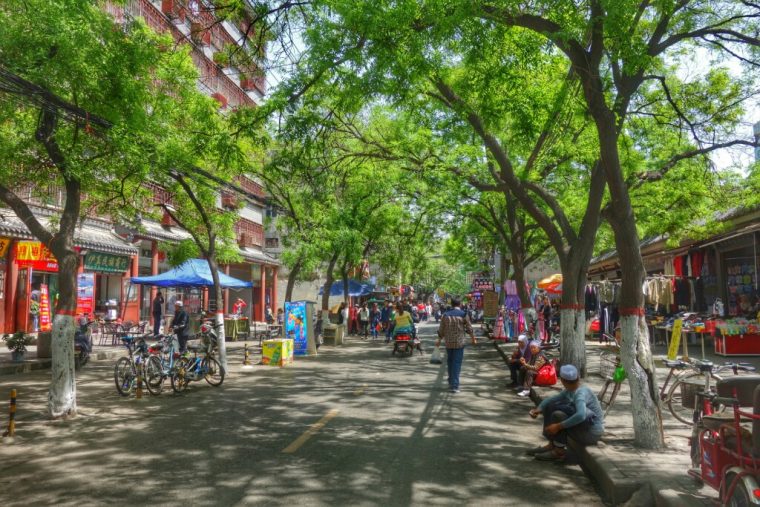 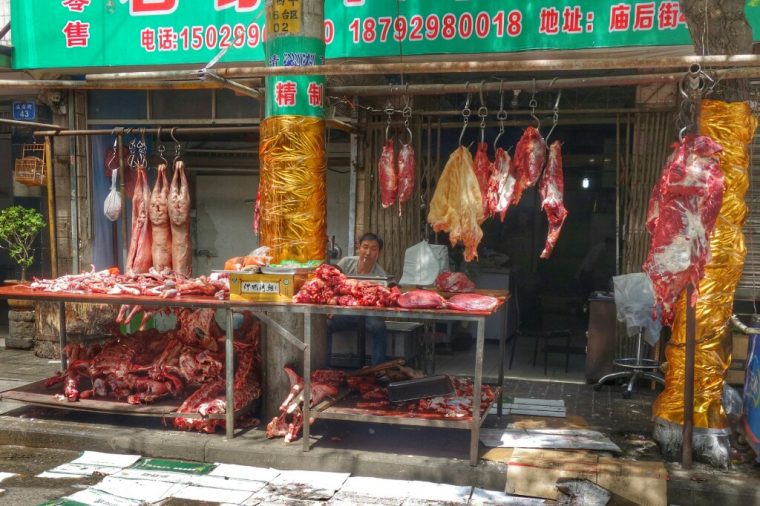 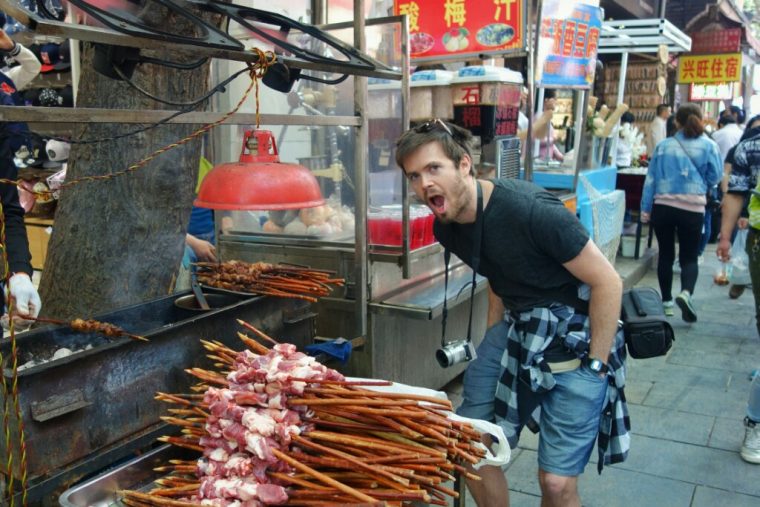 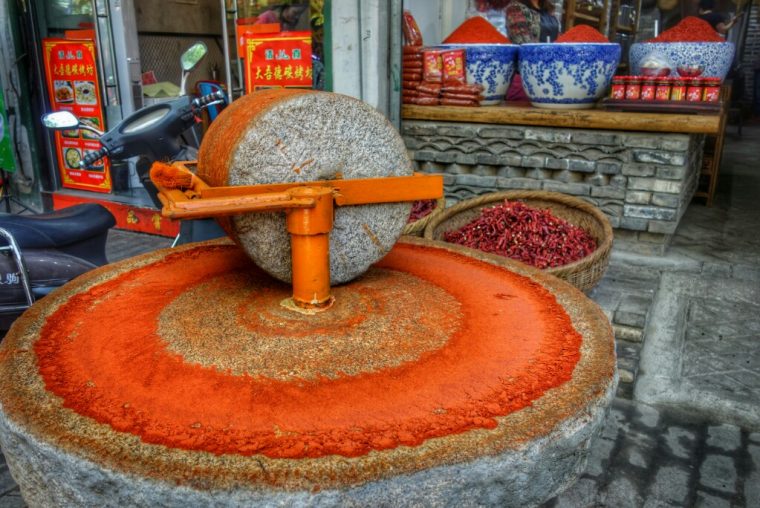 While in Xi’an we also visited the 2000 year old Terracotta Warriors Museum, at the site where they were discoverd 40 years ago. Whilst fighting for prime viewing/photography space with the Chinese tourists, we witnessed the process of how they painstakingly dig up the broken pieces of these figures, study them, label them and then attempt to assemble them (every single one is unique). This job would take extreme patience and love for what you are doing! I’m pretty sure I would go crazy if I had to do this!!

Here is a bit more info on this incredible archeological find if you are interested (quotes from: http://hua.umf.maine.edu/China/xian.html);

“Terra-cotta Soldiers — Qin Dynasty –221-206 B.C. – Everything about it is big and grandiose: it covers 56.25 square kilometers; there are terra-cotta models of 8,000 warriors; it took 700,000 workers to complete it; thousands of workers were buried within”

“The First Emperor (whose tomb the warriors guard) also managed to build over 6,000 miles of road to rival those of the Roman Empire, over a thousand miles of canals for flood control, transportation and irrigation, and consolidated three sections of what would be the Great Wall into a wall of 5,000 li. Just the work on the wall took 10 years and 300,000 soldiers and uncounted numbers of civilians.” 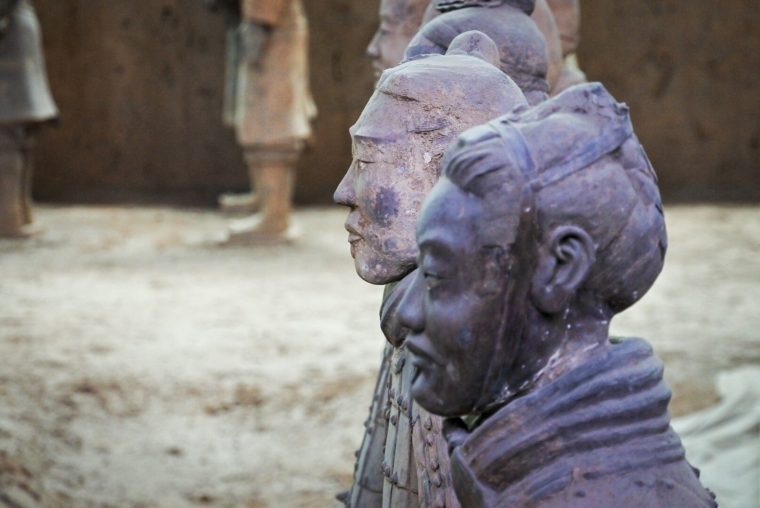 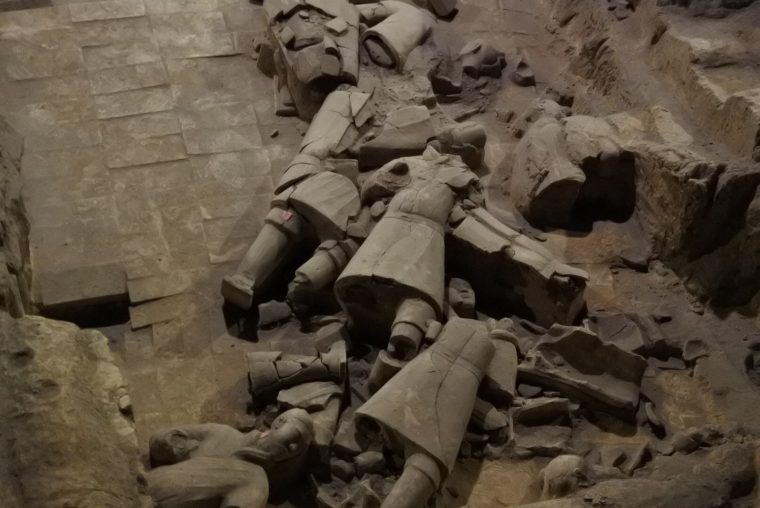 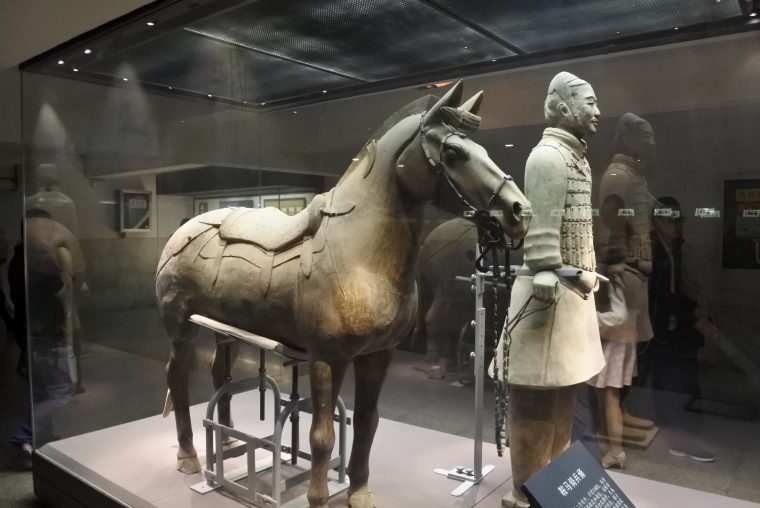 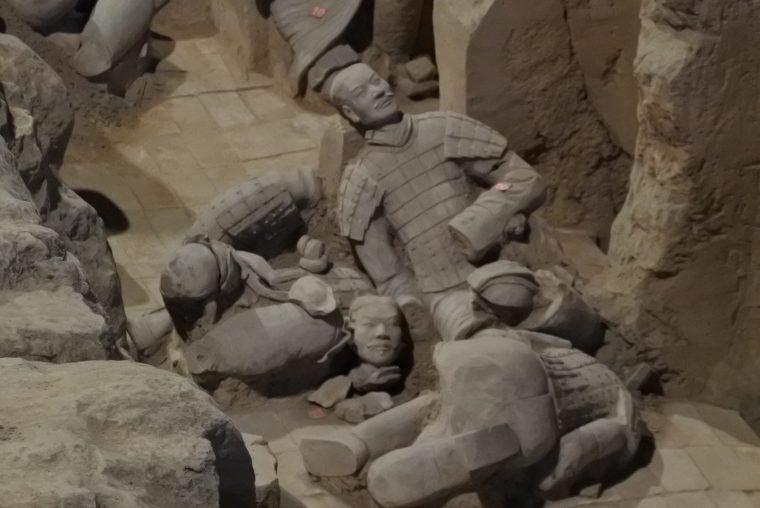 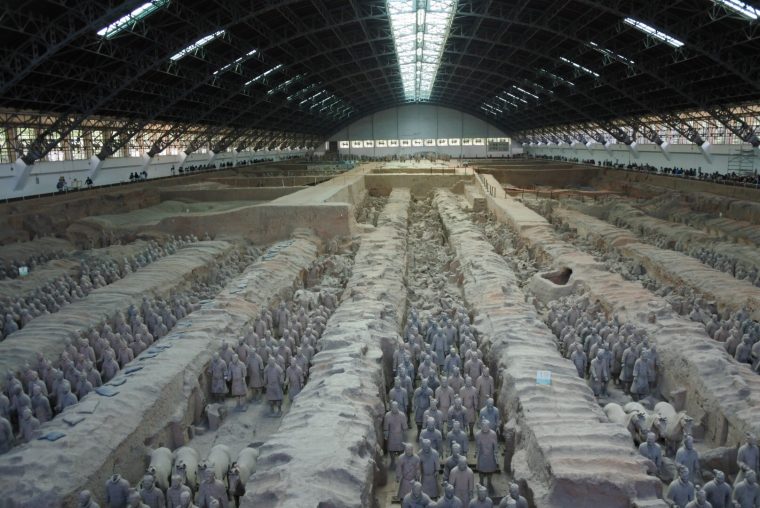 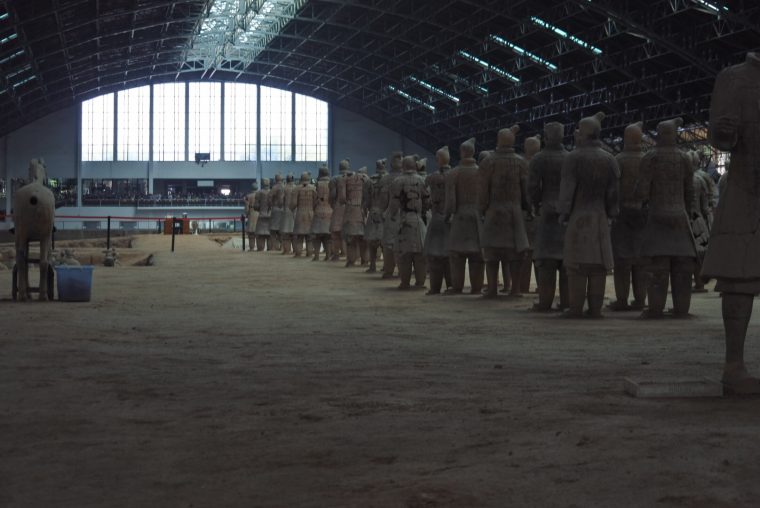 “Downtrodden in China” by Matt:

Below I am going to explain why we were feeling pretty over it for a while there in China, just to be honest to our friends (our family already know!) and to show that travelling long term isn’t just a massive holiday all the time!

While in Xi’an we took an afternoon to go up and walk some of the wall. It was here that we began to discuss why we still felt a little down and a little “over it”. Now before I begin please note that I’m doing my best to not paint a whole people with one brush, as we met sooo many lovely Chinese, but there are certain a truths to the Chinese population that even they admit! And you can only really understand this when you travel here and talk to the Chinese people themselves. The Chinese have just been raised differently to us, that is just a fact and sometimes the two cultures can inevitably clash.

1- There are literally more than a billion Chinese. 1.35 billion! And it shows. Everywhere we go, there are hundreds of Chinese people everywhere. At every tourist site, on every bus at every train station, these places become like a rugby scrum. And you do your best to not get frustrated and understand that it is just a function of a massive population.

2- Staring. These millions of Chinese don’t seem to have been taught to not stare. So when you go out, over an hour of walking you share your visual space with hundreds of Chinese people staring at you. They also have not been taught that if they do stare that a hello or a smile would be polite ( We got stared at a lot in Myanmar too but their beautiful smiles and “Ming-ga-la-bar” made it a pleasant experience).

3 – Lack of “polite”. In fact polite isn’t really even a thing here amongst the older generations. People from about 35 years old and up spit, yell, throw food on the ground and smoke everywhere. The government has put up signs and told the people to refrain from doing it! It is just something they do. They didn’t even really know it was “bad” until the outside world kind of told them and they grew this new awareness. The young people know it’s “bad” and are basically the opposite of the older generation.

4 – Personal space. The Chinese don’t understand what this is, and it makes sense when living with so many people. In the book “China Guide – A to Z of China”, written by a Chinese-American couple, they write “While in China, Americans should refrain from talking with their hands – they might accidentally hit a Chinese person!” Haha! It is so true and when you travel here you totally get it! I had an old guy in a line in Kunming train station RIGHT THERE in front of my face kind of looking “through me” talking on his phone just yelling straight into my face as he was half deaf. You just sometimes can’t believe its happening but yeh, it does and it happens often.

So when we came to the realisation that hey – all of this would get to anyone after a while and we aren’t “racist” or rude to feel gotten down by all of this, we really started to feel a lot better. There wasn’t anything “wrong with us”. And there isn’t anything “wrong with the Chinese”. It is merely a clash of two cultures where two groups of people are raised very differently, but it’s okay to get annoyed when your dodging spit, and we probably annoy them too! Also, on our leaving Xi’an, we struck up conversation with a couple of chicks from NZ and Belgium. After about a minute they brought up the staring and spitting and how they were fairly ready to leave China (the Belgian was leaving 2 weeks earlier than planned even!). It was nice for us to know that it wasn’t just us and that it can happen to anyone here. #Vent over

Now that Matt’s vent is over back to my story…

Next stop on our journey into the unknown is the Great Wall of China (and as usual in a pretty different area than most people see), and then onwards west into new landscapes, different cultures and food!! Leaving the east of China and heading west into the unknown stirs the type of excited feelings probably not too different to those experienced by explorers heading along the Silk Road to trade their goods all those years ago!! Except we are (thankfully) going on a bullet train, not a camel train.